About the book / O książce:

Rudolf Heinz’s life is far from perfect. His son avoids him, he’s a terrible guitar player, and he lives in constant pain. But there is one thing Rudolf Heinz is really good at – he’s the best profiler in Poland when it comes to serial killers.

When the police find the dead bodies of two young men, their heads covered in plastic bags marked with the numbers 21 and 37, Heinz faces his most challenging case. Taking on a killer who likes to play games, the investigation is complicated when he discovers the victims are priests, and the local police close ranks against him. As he analyzes each lead, Heinz’s search for the killer pushes him deep into his own past, unaware that he will soon have to save his own life. And he’s running out of time…

Halle took a special liking to the area around the Olympic Centre. He noticed good cars stopping there in the evenings. Their owners would meet and then, after several minutes, they would leave. Halle heard from somebody that it was one of the favourite tryst places for those who – here his interlocutors would always smile – ‘do it differently’. Poofs left behind not just used condoms, but also cans, unfinished bottles of beer, cigarettes in crumpled packets and even clothes. Halle could vouch for all of that: he himself found a t-shirt once, admittedly way too big for him, as well as a pair of unworn shoes. Somebody must have got really scared, he thought. Otherwise who would leave their shoes behind? And a good pair at that.

He recalled the shoe story now and felt better straight away. He had been in a good mood recently. The weather was nice, it had been warm for the last two weeks. There were more and more night rendezvous and plenty of leftovers to be scooped. Halle lit a cigarette. He was entering his hunt terrain.

A few cans and bottles were already clinking in his backpack when he noticed something strange. Somebody was staring at him from where the wall of trees started. Halle tossed the cigarette and put the backpack down. Years of experience had taught him that in this kind of situation it was best to have both hands free. Hands, which could still hit and rip heads off.

He looked at his watch, which he found in the bushes nearby last summer. It was 3.40 a.m. Nobody should be here at that time of night. He looked around. Strange. He could not see a car anywhere. He looked straight ahead again. The figure by the tree was sitting motionlessly and staring towards him. Wedich narrowed his nearsighted eyes and decided to come closer. Perhaps he would give the other one a fright? That would potentially mean an interesting loot. In such circumstances the most important thing is not to show any fear.

Halle made a step forward.

The other one still did not move. Strange. You are sitting somewhere in the middle of nowhere, at night, and somebody approaches you. Natural reaction would be to get up or even jump up, because you never knew what might happen and what the intruder’s intentions towards you were. The person that Halle was approaching was still sitting with his legs stretched out in front of him. On his head – Wedich squinted again – he had some kind of a hat. Maybe he is drunk, thought the ex-boxer. He looked at the trainers, seemingly in good nick. He might be lucky tonight. The hunt was showing promise.

But something was wrong. The person was still sitting, but not leaning against the tree, as one could expect. There was somebody else there. The sitting man’s back was resting against the other person. Halle noticed the second pair of stretched out legs. He slowed down. He could still only see the outline of those two, doing their strange gymnastics by the Palace at dawn.

Seize the initiative, that’s the way.

They should jump up now. But there was no reaction. Halle heard something crunch under his foot. He thought with satisfaction that he had just crushed a snail’s shell. Why do those bastards have to crawl under people’s feet? Something was still not adding up here. He took one more step and finally understood.

The head. The sitting man had something on his head. Halle felt his stomach in his throat, as if he was taking a ride on a Ferris wheel. But it was not the head stuck in a bag that was the most terrifying. The ex-boxer saw something strange where the mouth should be. Something that scared him stiff.

He turned around abruptly and vomited onto his bag with the takings of the whole night. He wiped his mouth and beard with his hand.

‘What the fuck… Holy shit!’

Czubaj manages to create his own style and sense of place. This is gritty, realistic, almost noir-ish writing, yet suffused with real humour and human warmth. The story itself is well-paced, keeps you guessing, and the back story or personal life of the characters never slows down the investigation…it’s an intriguing read from a young author who cleverly uses and subverts all the Anglo-Saxon crime memes. If you want to discover a new country on the crime fiction map, this makes for a good introduction to Poland.

21:37 is one of those crime novels I love — dark, mysterious, with absolutely zero hint of cutesy to get in the way of getting into the crime and starting the journey toward its solution…I was beyond happy with 21:37. It kept me entertained, glued and — the best sign of a good mystery for me — I was constantly trying to guess who might be the killer and never figured it out… I read this book in one intense sitting, unable to stop turning pages… Definitely recommended to readers of darker crime fiction. 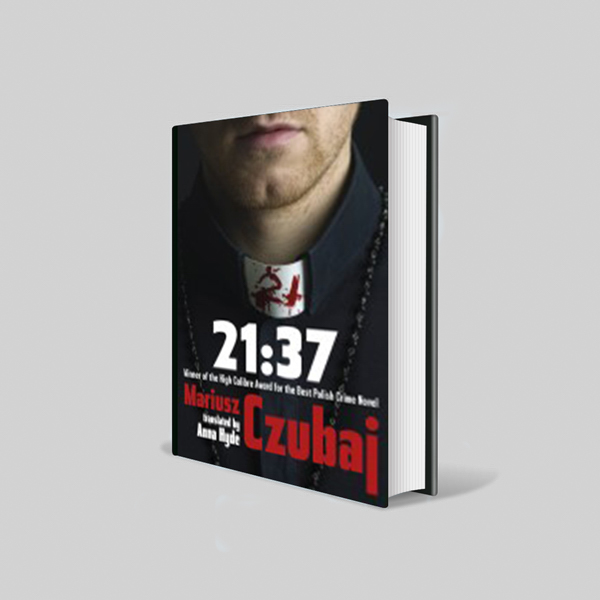