Wioletta Greg reflects on the decline of the peasant culture in the Polish countryside in this evocative short story. Published in Translation Tuesdays by Asymptote, part of the Guardian Books Network in December 2015. Original text in Polish published by Miesięcznik Znak in November 2914.

That’s how I imagined my beginnings in the stone house by the pond in Hektary in the village of Rzeniszów upon Boży Stok in the Jurassic Highlands, where I was born in February of nineteen seventy four, when the ice covered nearby ponds and cloth nappies froze stiff in the hall and in the attic. My Grandfather, Władysław Lubas—participant of the September Campaign, marksman of the 74th Infantry Regiment, stalag prisoner—was given three hectares of land during the Land Reform after the war. That was where he built a house of stone with brick corners, the house which looked a bit like a Polish country house. The right side of it—the dining room and two other rooms divided by a spacious hall—was the residential part, while the left side, with a separate entrance and a small window, was a barn. You could say that we lived together with the animals. In early Spring the rooms were filled with the smell of chopped yarrow for turkeys maturing in a cage under the table. A brooding duck sat under the ladder to the attic. Chickens, rabbits, dogs and cats wandered around the house. Up until the 1980s we used domestic appliances made by Grandfather. These were, amongst others: churns, pastry boards, rolling pins, wooden mixing bowls, pails held together by metal bands, stools and troughs. And since my Father’s hobby was taxidermy, there were stuffed martens, magpies and buzzards on the walls, while a stuffed rabbit in formal wear (in a top hat and with a cane) sat on a birch stump. There were beehives in the meadow by the apple trees.

“He would take the caramel to the orchard, /where among the leafless currant bushes/ the hives slept, frost piercing the latent swarm.// Their blood, congealed within chitin bellies,/ glimmers darkened in segmented eyes,/ melting together into an unfathomable whole.” 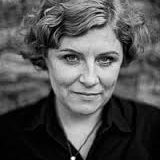 PREVIOUSA Farewell to my Dead Class - Irit Amiel
BACK UP